The “Palio di San Giovanni Battista” is a festival that recalls the 14th Century, a time in which Fabriano experienced its golden age. During this period the town affirmed its importance in the sociopolitical context of that time and saw a fast economic growth thanks to handcraft, paper, leather and pottery production, metallurgy. All this was supported by the entrepreneurial spirit of families such as the Chiavelli family, which ruled the town until 1435 and marked important milestones in the history of Fabriano. This is the century of the figurative arts, where the painting school of Fabriano reached its climax with the well-known artist Gentile da Fabriano. The festival of San Giovanni Battista has very ancients roots; San Giovanni became the saint patron of Fabriano only in the 1378 when Guido Chiavelli, after long battles against the rival families, defeated them and conquered the town on the 24th of June, the day of “San Giovanni Battista”.
After years of oblivion the “Palio” had been resumed in 1995 and since then it takes place every June. To pay homage to the Saint Patron, the four districts of Fabriano (called “porte”) take parts to different challenges (e.g. popular games, creation of artistic flower carpets, archery…). The final challenge, called “Sfida del Maglio”, takes place on the 24th of June. In this contest the four blacksmiths of each “porta” have to craft a perfect key starting from a rough iron bar. If the key is well-made, it would fit in a key-hole which unlocks a mechanism which let the banner of the winning “porta” rise to the sky. The winning blacksmith will be awarded as the best blacksmith in Fabriano for the whole year.

At the bottom of the eastern side of the Appennines, not far from Gubbio, rises the town of Fabriano. During the Middle-Age Fabriano was allied to Assisi. The very first travel of San Francesco d’Assisi was towards Fabriano and during this event he first spread its evangelical message to the world. The “Sfida del Maglio” contest takes place in the evening of the 24th of June. This is not an ordinary evening since the Palio takes place during the summer solstice, when the sun reaches its maximum height in the sky. A festival of the light then, where the fire coming out from forges of the four blacksmiths lights up the atmosphere and shoo the evil spirits. The blacksmiths beat the iron bars on the anvil; each stroke is a vortex of sparks, fire….a never-ending battle between good and evil, darkness and light. The night of San Giovanni holds a mystery, as the Four Elements the blacksmiths need to forge their keys do: Air, Ground, Water, Fire…the four colors which mark the four districts: blue (Porta del Piano), yellow (Porta del Borgo), green (Porta Pisana) and red (Porta Cervara). Only by joining the Palio it is possible to understand the magic atmosphere behind the “Sfida del Maglio”, the never-ending challenge of the blacksmith (homo faber) against gods, who tries to steal the sacred fire from them in order to forge the iron and shoo the evil shadows.

The art of the flower carpet making is a technique which roots back in ancient times. The Jesuit Giovan Battista Ferrari already mentioned this artistic technique in his work “De florum cultura”, published in 1633. This book is probably the first in which the ancient and complex art of flower carpet making had been described for the very first time. During the Palio each “porta” makes a flower carpet which can measure up to 48 square meters. Different colors and flower petals are used to realize this unique work of art. During the “Palio” it is also possible to come across several flower carpets in the town center, in some churches and cloisters. All these works of art contribute to make the atmosphere in the town center magical. The members of each district, better known as “infioratori” (also members of Infioritalia, the national association of artistic flower carpets makers), have only one night to realize the carpet. After a night of hard work, an independent jury judges the four carpets by following different parameters. The best realized and most beautiful “infiorata” wins the contest. It is not possible to fully enjoy the beauty of this work of art by watching it from a picture. It is highly recommended to observe the flower carpet live, in order to enjoy the bright colors, to smell the scent coming from the petals, to understand the complexity which lies behind the technique of the “infiorata”.
News: the sketches which will be the base of the “infiorate” during the 25th edition of the Palio will focus on the following theme: “A.D. 1406, Fabriano, creative city”.

Would you like to taste a bite of the real atmosphere from the Middle Age? Then enter one of the four “Hostarie”. Each “porta” has its own tavern where guests have the chance to enjoy the medieval atmosphere by tasting dishes of…eight centuries ago! You will be hosted by bizarre and gentle characters in a suffused and mysterious atmosphere…where jesters and minstrels will delight you with shows, music and ancient tales. Waiters dressed with a medieval attire will serve you delicious foods whose recipes date back to ancient times. A “Permissio Circolandi” will be given to you by the Prior of each “porta”; this special pass allows you to enjoy every aspect of the medieval life in every tavern you would like to eat. The waiters will be happy to explain you the origin of each dish, by telling you hints about how the different ingredients were used during the Middle Age. 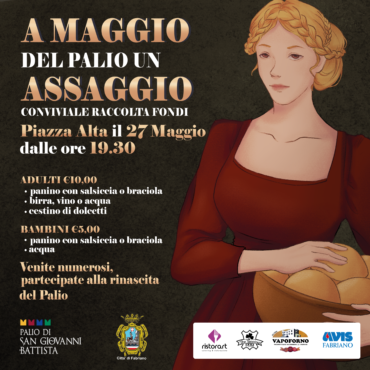